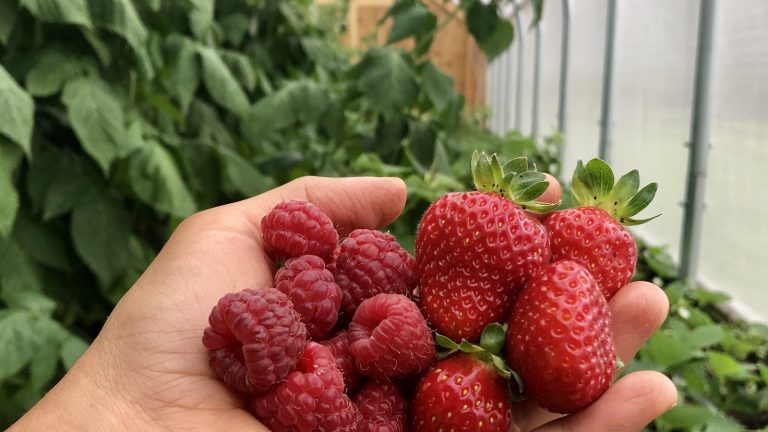 Here at Pacific Roots Magazine we have a commitment to continuously featuring vegan farms, farmers and vegan agricultural researchers around the world. With the September 2019 launch of content, we are very happy to share this piece in compiled in collaboration with Alisha Utter of Arbor Farmstead.

Alisha is very well known throughout the vegan farming network not only for her farm but for her current doctorate research in veganic agriculture. She grew up in New York’s Hudson Valley and prior to farming, earned a B.A. in Environmental Policy and Marine Science from the University of California, San Diego. She first entered farming as a means to gain a new perspective on the food system with the intent of pursuing policy work, however she fell in love with farming as a livelihood. She is presently completing a doctorate in Plant and Soil Science at the University of Vermont and the focus of her dissertation is on veganic agriculture. This work is in collaboration with Mona Seymour, an Associate Professor at Loyola Marymount University who first initiated work exploring the experiences of veganic farmers in the United States.

Alisha participated in the University of Vermont Farmer Training Program in 2014 and went on to work on non-veganic farms. She has led a vegan lifestyle since 2008 and farm tasks, such as spreading bloodmeal, illuminated the intersections between crop production and animal agriculture. However, her time spent working on other farms also made clear the many areas of overlap between veganic and non-veganic farms, such as the increasingly widespread use of plant-based methods (e.g., cover cropping). Alisha used veganic growing practices when she leased land for annual vegetable production in 2015 and continued to draw on these practices when she and Kyle transitioned to long-term land stewardship at Arbor Farmstead.

Kyle grew up in Essex Junction, Vermont and earned a B.S. in Mechanical Engineering at the University of Vermont. Today, he serves as a Medical Evacuation helicopter pilot for the Vermont Army National Guard and operates his own woodshop, K. Bowley Woodcraft, at Arbor Farmstead. When he is not flying or woodworking, he oversees building projects and maintenance at Arbor Farmstead. Kyle does not identify as vegan or a farmer, however is a veganic farmer by virtue of co-stewarding Arbor Farmstead and his invaluable assistance in caring for the land and animals by leveraging his areas of expertise.

On the establishment of Arbor Farmstead & what they grow

Alisha Utter and Kyle Bowley established Arbor Farmstead in 2016 in Grand Isle, VT. The Farmstead encompasses seven-acres of land maintained as both woodland and field crop production, which includes perennial fruit (e.g., aronia; currants; elderberries; raspberries; strawberries), herbs, and flowers. In addition to crops for commercial production, they also grow annual vegetable crops for household consumption and provide sanctuary to animals in need of a home, including a cat, two dogs, two rabbits, and a flock of retired egg laying hens.

Specifics of establishing a vegan farm

On specific challenges and key principles in establishing a vegan farm, Alisha explains: “There are a variety of general challenges in getting started farming, including an inherent learning curve and difficulties accessing land/startup capital. In addition to these, there are also entry barriers specific to veganic farming. For example, there is relatively limited information on explicitly veganic practices and principles, which can place limitations on knowledge acquisition. As beginning veganic farmers gain familiarity with the underlying concepts of veganic agriculture, it is increasingly easy to consult resources that may not identify as veganic, however contain information that can be extrapolated and applied, such as information on plant fertility and soil health. Given the relatively limited availability of farmer-vetted information available, there are plentiful opportunities for farmers to share their insights and experiences with one another and the greater community.

In addition to knowledge gaps, it was challenging to navigate sourcing the appropriate plant-based inputs, such as compost, straw, and woodchips, until we developed a more extensive agricultural network and had a better idea of how to navigate advising from agricultural outreach professionals.”

Alisha was fortunate to be connected to other veganic farmers through her dissertation research on veganic farming and was already engaged with the broader agricultural community in Vermont. This helped catalyze their access to both information and material inputs. They suggested, “We would strongly recommend that farmers, especially veganic farmers, make an effort to cultivate a diverse community of support – locally and beyond.”

On being involved in veganic farming networks

Most of the veganic farming networks Alisha and Kyle are engaged in are through social media platforms, such as Facebook groups (e.g., “Veganic Farmer Community Page”; “Regenerative Vegan”) and one-on-one exchanges facilitated through Instagram. Overall, members of the veganic agricultural community have been very generous in sharing information with Alisha as both a researcher and a farmer. Another network that Alisha and Kyle are more passively engaged in, yet equally grateful for, is the Vegan Organic Network, which distributes information specifically on veganic farming.

On perception of the future of veganic farming

Alisha notes that, “My vision for veganic farming is a movement that emphasizes inclusivity and intersectionality while continuously developing a foundational science/set of practices that mutually benefit the environment, communities, and farmer livelihoods.”

Alisha and Kyle believe that the principles and practices of veganic farming are critical tools in the sustainable/regenerative agriculture toolbox needed to address many local and globally-relevant challenges, ranging from equitable food access to climate change.

Alisha explained, “Recent reports, such as that released by the United Nations Intergovernmental Panel on Climate Change, indicate that we need revolutionary change in the way we approach both food production and consumption. It is my hope that the semantics of veganic agriculture and the inherent ties to potentially negative stereotypes of veganism do not limit the adoption of strategies that are proven to be effective by both researchers and farmers.”

Alisha and Kyle encourage both farmers and consumers to engage in discussions about veganic farming – from the benefits (e.g., produce safety improvements) to the challenges (e.g., relatively scarce information on veganic agroecosystems).

There are a growing number of resources on veganic farming, including the outputs under development by Alisha and Mona tied to their “Growing Veganic”. Some resources that may be helpful for those interested in learning more, include: