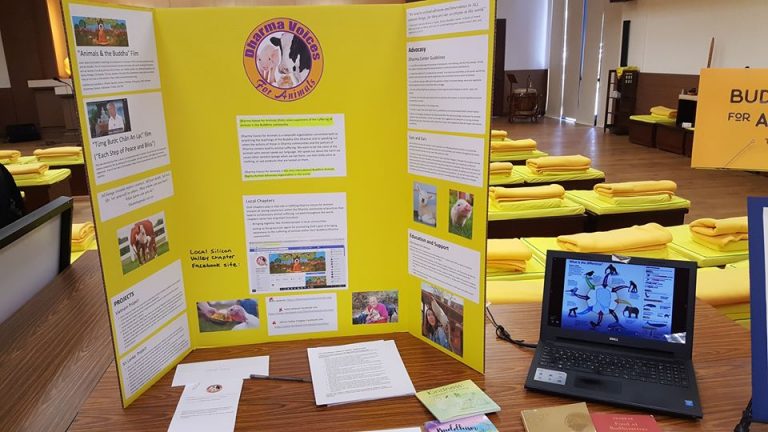 “Especially in light of the urgency of our climate emergency, a Buddhism that is not engaged is not true Buddhism. Buddhism must be engaged with the most pressing concerns of our society and world.” -Andrew Bear

As part of our ongoing Faith, Sustainability & Stewardship article & interview series, we chatted with California based Andrew Bear, a chapter leader for the Silicon Valley Chapter of Dharma Voices for Animals since 2015 and involved with other animals rights organizations, such as Anonymous for the Voiceless.

We first learned about Andrew via his essay ‘Waking Up with Each Bite: Contemplation for Meals’ in the book Buddhism & Veganism, a collection of essays edited by Will Tuttle. We were thankful to connect with Andrew to learn more about his Buddhist practice, thoughts on engaged Buddhism and animal advocacy work.

Was meeting Thich Nhat Hanh in 1991 your introduction to Buddhism?

“Aware of the suffering caused by the destruction of life, I am committed to cultivating compassion and learning ways to protect the lives of people, animals, plants, and minerals.  I am determined not to kill, not to let others kill, and not to support any act of killing in the world, in my thinking, and in my way of life.”

Practicing with this mindfulness training watered the seeds of compassion within myself, and set me on a path that would eventually lead me to give up eating meat, and then all animals “products.”

What is your Buddhist practice and training?

Andrew: I continue to practice in the tradition of Thich Nhat Hanh.  The practice is very simple in a way, and yet has no end.  My personal practice is mindfulness and ethics precepts, applied in my daily life, engaged with the world, in communuty.

Mindfulness is the practice of maintaining awareness of body and mind each and every moment.  Like right now! My practice also includes reading and reflecting on the precepts, the Mindfulness Trainings, which help me express mindfulness in a way that is compassionate, wise, and wholesome. Mindfulness practice and precepts are actually one practice.  This is directly related to a vegan way of life. If we bring mindful awareness to our food, guided by the ethical practice that says, “Aware of the suffering caused by the destruction of life, I am committed to cultivating compassion and learning ways to protect the lives of people, animals, plants, and minerals,” then we will grow in our awareness of the suffering of our animal friends, grow in our compassion, and grow in our commitment to eat in a way that causes as little harm as possible.

Thich Nhat Hanh teaches a Buddhist path often called “Engaged Buddhism,” which means our practice of mindfulness and ethical precepts are engaged in our daily lives–with our family and friends, at work, and in the social dimension of our society. When I advocate on behalf of animals, or engage with animal rights organizations, I see this as in integral part of my spiritual practice.

In our tradition, there is also a strong focus on community, called “Sangha.” I cannot imagine spiritual growth, or a sustained Buddhist practice, without the support and inspiration of others on this path.

I also feel devotion to Quan Yin, also known as Avalokiteshvara in Sanskrit language. Kwan Yin is a Bodhisattva of compassion, who hears the cries of all beings who suffer.  Meditating on Quan Yin waters the seeds of Quan Yin within me, and nourishes my understanding and compassion.

It was via your essay in the book “Buddhism and Veganism” that I learned about “The Blue Cliff Letter” which I now understand to be a critical text in modern engaged Buddhism. What are your thoughts on the relevance and applicability of engaged Buddhism for today’s environmental concerns?

Andrew: Especially in light of the urgency of our climate emergency, a Buddhism that is not engaged is not true Buddhism. Buddhism must be engaged with the most pressing concerns of our society and world.

Buddhism has a lot to offer people who are working to make the world a better place.  The wisdom of Buddhism reveals that nothing exists as a separate self or entity. All things are interconnected. I go into detail about this in my essay, in reflection on how the whole cosmos can be found in my spoonful of oatmeal. Thich Nhat Hanh calls this “interbeing.”  When we begin viewing the world and cosmos as one, inextricably interconnected, then we see that when we harm the Earth, we are harming ourselves. This awareness of interbeing can help us take care of the Earth.

Furthermore, the meditation practices of Buddhism can help us cope with the trauma and grief from our climate emergency and destruction of our dear Mother Earth’s web of life.  Meditation practices can help us respond to this situation from a place of deep love and fierce compassion, so that our efforts don’t bring more aggression and hate into the world.  Meditation can help us work for a positive change without burning out.  Also, the ethical teachings of Buddhism, the precepts, can guide us in creating a society and planet that will consider the welfare of all living beings.

It is also clear that becoming vegan is likely the number one thing people can do to lower their environmental impact, including greenhouse gas emissions, deforestation, water pollution and use, ocean dead zones, and more.

It has been inspiring to see many Buddhists get involved in Extinction Rebellion, and view this activism as a natural expression of Buddhist practice.

It was also via your essay in Buddhism and Veganism  that I learned about your transition as a vegan (over several years).  What are some of your thoughts on why veganism is not the norm, broadly speaking, in the global Buddhist community?

Andrew: Ultimately, we have to start where we are.  For most people, there is a strong habit energy for eating meat, and it is very difficult to change our deeply ingrained habit energies.  This was the case for me.

Buddhism can help in many ways.  The insight we experience as a result of Buddhist practice helps us become aware of our habit energies, as well as our resistance to change. Mindfulness practice helps us to stay with the present moment, and to allow whatever we are experiencing to be there without reacting. We can watch thoughts, feelings, and cravings arise without following them or reacting to them.  This is very helpful when we try to work with habit energies, such as eating meat, eggs, or cow excretions such as milk or cheese.  When we stop consuming these “products,” we might have cravings. With mindfulness, we practice allowing these cravings to arise without acting on them.

The ethical precepts of Buddhism are also helpful on the path to veganism.  Ethical precepts show us the direction we need to go.  While it is true that we will not be able to live 100% nonviolently, it is still important to continue to head in that direction.  For me, when I find another change I can make to live more compassionately, I make that change and allow this to become the new normal, the new habit. Then I make another change.  This is how I slowly moved from a Chicago pizza and meat diet to a vegan diet.  We will likely not ever arrive at a place of perfect nonviolence, but we can always make changes to move in that direction.

For me, the Buddhist community, or Sangha, has also been a help on my journey to a vegan way of life.  When I am in community with others who also practice kindness to all living beings, this way of living in the world becomes normalized. At retreats and gatherings, when there is wholesome vegan food available, we have practical examples of ways to eat compassionately and deliciously.

It is important to note that all traditions of Buddhism have teaching and tradition of compassion for all living beings, and not harming. It is true that when Buddhists talk of compassion for all living beings, and then participate in their slaughter by eating them, that their actions can be viewed as hypocritical. In the Buddhist traditions of China and Vietnam, for example, vegetarianism and veganism are the norm.  In other Buddhist traditions, people do consume animal “products,” and may not find any contradiction. This is why Dharma Voices for Animals is so important.  As the only international Buddhist animal rights organization, Dharma Voices for Animals (DVA) raises awareness of the suffering of animals in the Buddhist community. Dharma Voice for Animals is committed both to practicing the teachings of the Buddha and to speaking out when the actions of those in Dharma communities and the policies of Dharma centers lead to animal suffering. We want to be the voice of the animals who cannot speak our language. We speak out about the harm we cause other sentient beings when we eat them, use their body parts as clothing, or use products that are tested on them.

In Thich Nhat Hanh’s practice communities, students are not required to be vegan but are the food servings predominantly plant based?

All of Thich Nhat Hanh’s monasteries around the world are vegan.  Also, in all my experiences with local community gatherings, which often feature potlucks, I have never encountered an animal product.

Can you share a bit about the work you do as a chapter leader for DVA?

Andrew: As a chapter leader I have been doing outreach to local temples and practice centers.  In San Jose, there are many Vietnamese Buddhist temples.  I worked with a Vietnamese woman who is well connected with the temples, and we showed DVA’s movie, “Animals and the Buddha,” then had a discussion about veganism. I also speak at local sanghas and more recently at the “After Mindfulness Urban Retreat” held this past year in Berkeley.  Additionally, I have been invited by area farm animal sanctuaries to lead grief support groups and memorial services for farm animals who have died.   I also participate with animal rights organizations beyond the Buddhist Community.

Thank you Andrew for your time! To read more about the work of Dharma Voices for Animals & contact chapter leaders visit them at https://www.dharmavoicesforanimals.org/