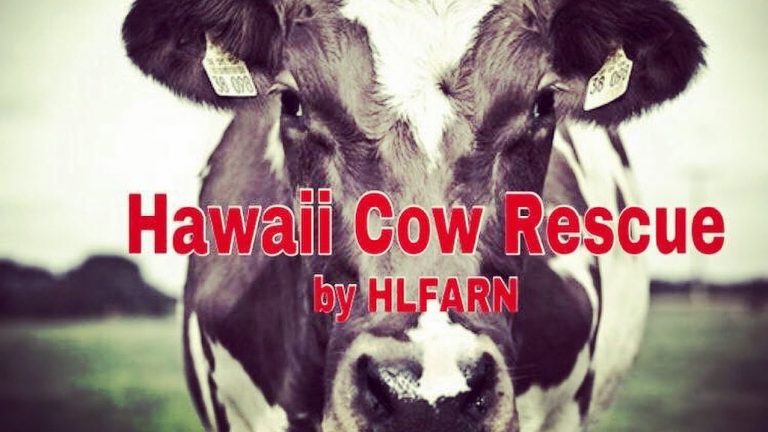 Editor’s Note: Last month we covered the ongoing Hawai’i Cow Rescue with an interview with HLFARN (Hawai’i Lava Flow Animal Rescue Network) founder & organizer Alessandra Rupar-Weber. I, along with many others globally, have been following the Hawai’i Cow Rescue this year, primarily via social media, where Alessandra posts extraordinarily informative as well as moving posts about what this cow rescue has entailed- the vast energy required from humans for the task as well as the emotional toll as well as the stories of the cows- hundreds being moved to their “forever homes” and closing the chapter on their lives as products and commodities. Mother cows, calves and cows giving birth sometimes just hours after being rehomed to safe pastures.

This past weekend, I saw Alessandra posting these incredibly moving summaries of the Cow Rescue, along with a moving call to sacred activism and a call for us also to evaluate how we can effect change in the paradigm shift that we seek and that is occurring in animal liberation. Please read on for Alessandra’s testimony as an animal rescue organizer, a sacred activist and in my viewpoint, as a true mensch.

It will need take some time to getting used to the #hawaiicowrescue now being over. Nine months of total focus on these cows – I am of course still in cow rescue mode. Knowing that there are still hundreds up there (on pasture and safe for right now) and millions and millions elsewhere – I just hope ripples of change were created, hearts opened and minds changed with this effort.

I hope that these remaining cows will be “bought” by a least-of-all-evils team of people who will not kill the boys and separate the babies from their mothers and that the cows can live out their natural lives in peace. If the sale does not go through – we will continue. Raising funds and homing 367 cows was not a small feat, it shows what a small group of committed people can achieve when their hearts are bleeding and their aim is to save lives from slaughter. Passion can move mountains and touch many others; thanks to social media, worldwide. We didn’t become “influencers” or hit mainstream news but by persisting we were able to create this outcome.

I was aware from the beginning that we would not be able to save all of them (2600+). I don’t know how many were actually slaughtered but I estimate about 1000. Let that sink in. So next time you cheer, “dairy is going down” when you read another dairy closed, think about the individuals and what will happen to them. We will need a lot of land worldwide to save a small percentage of these angels in the coming years. We must seriously think out of the box and come up with sustainable business models how to take care of them without exploiting them and sustain the leases, feed, vet care and our own livelihoods – new Sanctuary models, new industries, new ways for the farmers to actually keep the animals and create different means of income. If the animal industries (small, medium and large) are going out of business we need to be there for the animals and also for the people – we need to create world wide think tanks on how we will proceed.

Sanctuaries on a daily basis have to turn animals down in order to responsibly care for the ones who made it there. You don’t even want to know how many lives big sanctuaries have to turn down in one year. Eventually, over many years, the numbers of animals in need of rescue might get smaller if the endless breeding stops and we have a world wide change of heart in terms of using animals as commodities.

We had incredible support with this cow rescue, even if we were only able to save about 14% of the “inventory”. And hopefully the remaining ones will be saved, depending on the new buyers. Even if we all get together and try to save 5% of animals heading to slaughter worldwide, we are dealing with numbers that are unfathomable.

What a reality check. The world right now is in huge parts is insane when it comes to abuse, torture, enslavement, mutilation, rape and murder of innocent, deeply sentient and feeling beings. We became war overlords in our own homes, making choices on a daily basis that we hardly questioned. A few of us broke free, and although we feel some light filling our collective cracks of the unfathomable pain we all took part in, we also now feel, see and experience the darkness and evil forces much more. Taking blinders off that were the unquestioned norm for so long is not exactly a joy ride but many of us regard it as our ethical human duty to not drown out the noise of these collective cries any longer.

Truly, each of us can only do so little but we are, together, on a roll, even as tiny fragile imperfect individual crystalline snowflakes we can create mighty avalanches of change and lessen the sheer violence that today is still norm – bit by bit.

I invite you to find your voice, your passion, your heart break that keeps you up at night. I am living proof – act, no matter how insignificant and incapable you think you are. I am a nobody, I didn’t finish university or have special skills or powers. I am as imperfect and self-doubting as they come – but I am driven. Find your drive and the helpers, angels, guides, supporters, (and haters, hahaha) will come. It will probably not be easy, but it never is,is it?

Last year, our tiny tiny group of people was able to save, home, rescue and relocate over 1000 animals in need during the lava flow. With other organizations, networking, diplomacy and playing it right, the Hawaii Lava Flow Animal Rescue Network came out of nowhere and stood up for the second class animals – the farm animals. This year, I thought if we can rescue 50 cows, maybe 70, that would be great. And we didn’t stop there, we worked it via social media, news outlets, flyers, emails, what have you. We thought when we reached 140 that we were done. Both Syndi and I were beyond exhausted but people kept on believing in us, either some more funds would come in or new possible homes and so we kept on going. We still would, but for now, we will concentrate on other causes.

Of course these intense rescue efforts are huge tests – about yourself, your emotions, durability and sanity. You lose friends, you gain some, you are ridiculed, bashed; not a “true vegan”; you might age fast, FML became one of our common expressions via slack; but – a look in their eyes, seeing them running on pasture, the babies that were born, seeing the mamas fattening up, and meeting new awesome people along the way – truly makes up for the negatives and the grief.

I want to thank most and foremost Syndi Texeira who co-created all this with me. We might have different opinions sometimes, different agitations and stresses but with eyes on the prize we were always able to overcome hurts and blemishes and thank goodness had each other to vent and be silly with also. I am so honored and blessed to have you in my life Syndi, you help me having a purpose, staying (half-way) sane and realizing impossible tasks and endeavors. I am a lucky girl to have you as my rescue partner, so very very fortunate.