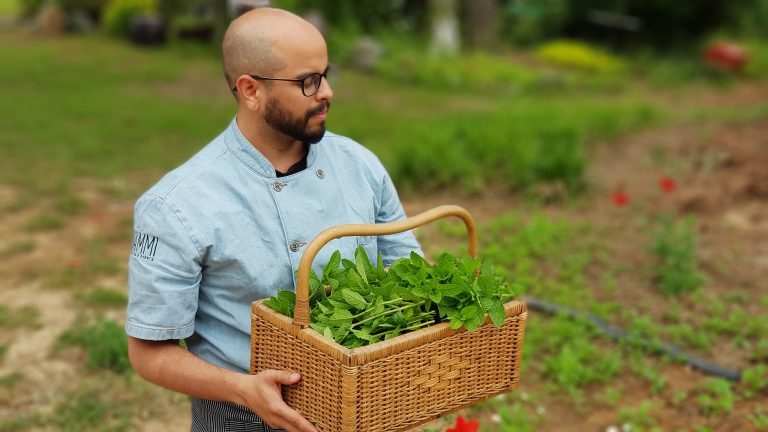 “I try to create new things every single season, using what is fresh and available, to surprise and delight our customers, like it was an invitation to have a date and discover new things together.” -Christian, Nammi Plant Lab

Originally from Cali, a small city in Colombia, Nammi Plant Lab‘s CEO and Head Chef Christian Oviedo was looking for an opportunity to learn more about Asian food and its culture so decided to go on a trip to China, South Korea and Japan. After experiencing traditional Korean food for the very first time, he fell for it and decided to move to Seoul to learn more about it. It’s been 5 years since that move and one year since he opened Nammi Plant Lab.

Nammi doors were officially opened in July 22nd, 2018. The restaurant concept was born from Christian’s observations of the growing demand for vegan food in South Korea and also needing a place to express his own personal journey as a cook. Pacific Roots Magazine had the opportunity to chat with Christian about his background, produce by season, Nammi’s vegan ethos and more.

What is your culinary background and when were you introduced to plant-based and vegan cooking?

Christian: I grew up with a strong passion and interest for cooking and the culinary world just by watching my mom cooking for my whole family every single day, especially on weekends when there was supposed to be a special menu to spend time as a family. Then, I had the opportunity to help a relative in a bakery shop. A couple of years later, a friend invited me to run a vegetarian restaurant with him— it was around 15 years ago. By then, at least in Colombia, saying ‘vegetarian’ meant ‘vegan’, but because it wasn’t that common, we added some items that contained cheese in them. After that, an acquaintance offered me a job as manager of a pizza hot spot in town. All those working experiences and the fact that I was always curious about food, ingredients and cooking techniques, led me to attend a professional culinary school in Argentina, where I also had the chance to work in a big bio-dynamic vegetarian/ vegan restaurant in the city. Then, after moving to Seoul, as vegan was (and is still) not that acknowledged by locals, I decided to work in a non-vegan, traditional skate fish restaurant to learn more about the culture and local food consumption habits. In the meantime, I was preparing everything I needed to open Nammi. And here we are now, turning one year in July.

Are you sourcing a lot of ingredients locally? Can you share a bit about your relationships with the different farms there?

Christian: South Korea is not a big producing country in terms of agriculture. They import a lot of fruits and vegetables from China, Thailand and Vietnam. Also, with the fast-growing economy and the development of big cities, farming is a disappearing industry. There are a few farms dedicated to selling their products to the public. It’s becoming a family tradition kept by the elders. Even so, restaurant owners and chefs are advocating for a more sustainable business plan and relationships with farmers are becoming more popular. I was lucky enough to start a business relationship and collaborate with a couple of old farmers in the small countryside city of Seosan. They provide us the land and the man power to produce different herbs and seasonal vegetables to be used at Nammi Plant Lab. One of the perks of doing this is that we can be sure the seeds are organic, and the products are pesticide-free. We also were lucky enough to start a relationship with an organic tangerine farm that provides us with Korean varieties of tangerines, by seasonal demand.

Can you share a bit about the different produce there by season?

Christian: With the disappearing tradition of farming, greenhouses are becoming the norm in the country. Still, you can see people buying cucumbers, chili peppers, watermelon and Korean melon, known as chamoe, during summer. During autumn, apples, pears, pumpkins and sweet potatoes are the staples for locals. Winter offers a traditional ingredient called Deodeok, a root that is commonly roasted and eaten as a side dish. You will also find local species of tangerines, pomegranate and Asian varieties of radish and cabbage. Finally, during spring, you can get your hands on a lot of different varieties of namul (Korean wild herbs and greens).

What are some of your personal favorite ingredients to work with?

Christian: Saying you have favorite ingredient is like saying you have a favorite child. You love them all and it is impossible to choose. But, I love playing with legumes, potatoes and ingredients that you can use not only what is normally cooked but also the peel, the roots, leaves, flowers. Using all the parts of an ingredient to provide the dish with colors, textures and flavors.

What is the ethos at Nammi Plant Lab— both in terms of culinary mindset as well as the vegan nature of the business?

Christian: Even when Nammi Plant Lab was conceived as a vegan restaurant, our mission was to provide delicious food to everyone, not only plant-based food advocates. Harmony in our dishes is really important and we care a lot about every small detail of every dish we serve as well as how we treat our guests. We invite them to come here and have a delightful meal and experience is also important for the service we aim to provide.

You named it Nammi Plant “Lab”— not cafe or restaurant, so how does this figure into the ethos of the business and your culinary approach as well?

Christian: It is called Plant Lab because of the curiosity and the necessity to explore and play with different ingredients; not only to create new dishes, but also to transform comfort foods into something creative and special. If I find a new ingredient or think in a different way about something I am already doing, I start exploring options and then add it to the menu so people may have a chance to understand my personal approach to food.

Many of the readers of the site will probably never have been to South Korea. So, can you share a bit about your perspective of the food scene, in general, in Seoul and then, more specifically, the vegan food scene?

Christian: A lot of people say being a vegan in South Korea is hard. I think that is true, but only if you are looking for 100% vegan branded products and food replacements like plant-based meats or cheeses. Traditionally, due to its own history, Korea has been a country that has relied, as far as food production, on what the nature of the mountains, fields and the sea side offered. This originated a lot of different side dishes, or banchan as they are called here, made 100% of vegetable and natural ingredients. Even though this is a big part of Korean culture, veganism is something that most people don’t know of, never have heard of before or can’t understand. Luckily for the local movement, a change is happening in town and a lot of amazing vegan places are popping up around, so I think this is a good moment for being a vegan in South Korea.

What are you picking up on as far as plant-based culinary trends there that will likely develop more in coming years?

Christian: I was recently invited as a guest for a local podcast program about veganism and I was asked a similar question. I think vegan food has to catch up with its ‘normal’ — non-vegan— counterpart. Professional chefs, self-taught cooks and restaurateurs, we have the obligation to make that happen. Soon, you’ll be able not only to find meat and cheese replacements but also you will easily be able to find an amazing plant-based fine dining restaurant, a plant-based food truck and more 100% vegan stands in big food fairs and international summits.

Are there signature dishes by season at Nammi Plant Lab and Bakery?

Christian: I kind of don’t like the idea of creating signature dishes. I believe that if you really like a restaurant, in a way of speaking, an emotional relationship with the place begins. But if you base your relationship on some fixed dishes, the relationship will become monotonous and eventually you will get tired of it. I try to create new things every single season, using what is fresh and available, to surprise and delight our customers, like it was an invitation to have a date and discover new things together.