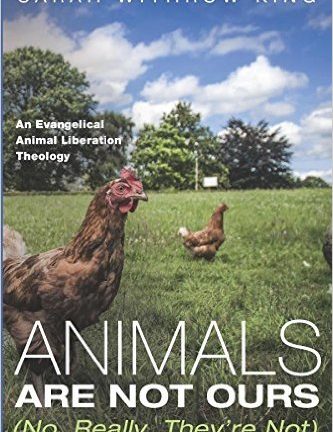 As part of our ongoing Faith, Sustainability & Stewardship series we spoke with Sarah Withrow King, Co-Founder and Co-Director of CreatureKind, an organization whose core mission is “to encourage Christians to recognize faith-based reasons for caring about the wellbeing of fellow animal creatures used for food, and to take practical action in response”.

In January of 2016 David Clough and Sarah Withrow King in January announced the launch of the CreatureKind project to a gathering of about twenty interested academics at the Society of Christian Ethics conference. The organizations goals include equipping Christians with a theo-ethical framework to discuss animal issues, providing education and support to Christian leaders to help change the way that animals are viewed by Christians, to assist churches and other institutions commit to a new approach with regards to their sourcing and consumption of animal products and more.

Pacific Roots Magazine: How did you and David Clough reach the point of deciding to found CreatureKind?

Sarah Withrow King: It seemed to us that, on the whole, the church in the US and the UK had been sleepwalking into complacency with a system of abusing animals that is patently at odds with Christian beliefs about creation. But, our conversations with other Christians suggested that the church is ready to begin charting a new path.

Pacific Roots Magazine: The team and advisory councils for CreatureKind feature quite a dynamic line up.  How has this team grown as well as the CreatureKind community since you founded?

Sarah Withrow King: We spent a lot of time in the first couple of years (and still now!) just reaching out to and having conversations with people whose work we thought might resonate with ours. We don’t think people are drawn into movements or relationships by being shocked or shamed into them. We want to find places of agreement and move forward together from there. I’m proud that we’ve grown intentionally slowly, paying attention to a wide range of diversities, and that as an organization we’re committed to shared leadership, paying attention to intersectional approaches, and working under a “big tent” strategy.

While other animal protection groups ignore or insult the Christian community, CreatureKind is dedicated to the painstaking work of developing relationships, establishing trust, and showing up again and again and again to ask, “What about the animals?” As a result, CreatureKind has grown to become a trusted organizational partner to well-established Christian organizations and institutions, a respected voice on Christianity’s role in animal protection, and a safe haven and rich resource for the Christians who are working from within the church to change hearts and minds and actions for animals.

Pacific Roots Magazine: Can you share a bit about the books you wrote and what motivated you to write them?

Sarah Withrow King: I wrote Animals Are Not Ours (No, Really, They’re Not): An Evangelical Animal Liberation Theology as my seminary graduate thesis. It was fun to try to bring together different strands of thought that I had explored in seminary: liberation theology, evangelical commitments, and animal protection. I wrote Vegangelical with everyday Christians in mind. In that book, I tried to craft a straightforward theological approach that would resonate with a wide swath of Christians. Then, in the second part of the book, I examined some of the ways we use animals today (as food, for entertainment, clothing, etc.) through that straightforward theology. So, how do we present the image of God, for instance, to our companion dogs and cats? How should Jesus’ command to love all our neighbors influence the choices we make about what to eat?

Pacific Roots Magazine: How has CreatureKind’s outreach and work with churches grown since its establishment?

Sarah Withrow King: When David and I launched the project in 2016, we were each able to spend just a few hours a week on developing the program, having conversations, doing the work. Now we have a few regular team members, including a full-time co-director, Aline Silva. I think in the last four years, we’ve learned that there’s still a lot of work to be done to raise awareness to the realities of our food production systems in North America and the UK. Too few Christians in the US, for instance, realize that factory farming is responsible for the vast majority of animal products consumed in this country, and that animals and people suffer horribly in that system. At CreatureKind, we see more and more people downloading our six-week small group course, and more and more people running the course at their church. The course helps Christians think about questions like, “why did God make animals?” and “do animals go to heaven?” It’s a wonderful way for people to raise important conversations without scaring anyone off!

Pacific Roots Magazine: The CreatureKind website lists many ways that people can get involved.  For those reading this interview directly, can you describe how individuals to groups and organizations can partner with and learn from CreatureKind?

Sarah Withrow King: Anyone who wants to think more about what it means to be Christian in relation to farmed animals can partner with CreatureKind in some way. People can: