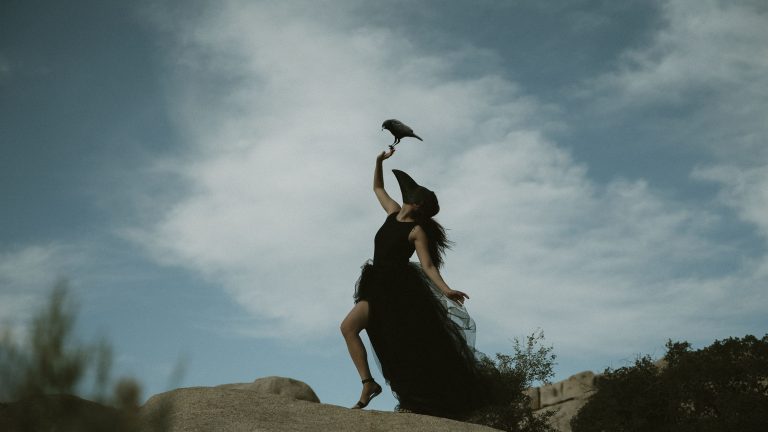 “I truly believe that our future must be rooted in being kinder to animals. Just that little act alone could teach humans how to better the environment and their own soul. For me, becoming vegan was the missing link to my mind, body, and soul being at peace. For others, maybe it could be just cutting down on meat, or becoming vegetarian. We have to learn to live together and respect each other— despite the species. The earth is calling for it.“ -Dawndra

Seattle based photographer Dawndra Budd caught our eye with her regal, gorgeous, enchantingly strange and often nature-based photography. A lover of animals, a vegan and an advocate for animal rights, Dawndra’s fine art not only is crafted of extraordinary beauty but conveys purpose and meaning as well. We were glad to have the opportunity to chat with Dawndra about her work, specific motifs, energy at her photoshoots, the beauty of the Pacific Northwest and more.

Can you share a bit about nature’s influence on your work and particularly the spirit cleansing aspect you recognize in the natural world that also influences your craft?

Dawndra: Yes. When I was a child, I would seek out nature for solitude and for sanctuary. It would remind me that my problems were small in the grand scheme of things. I could get lost in all of the beauty and splendor that nature has to offer for hours. When I was eight, my step-dad took me hunting out in nature. That was also the moment I decided that I no longer wanted any part of eating meat. It would be years until I figured that out for myself. Animals and nature both mean so much to me and have both changed my life on numerous occasions.

Your photo titled ‘Beast or Master’ is so compelling visually and the caption makes it even more intriguing. Can you share a bit more about the concept for this photo and also your process of conceptualizing design and motifs when shooting ?

Dawndra: I had bought the buffalo mask with an intention to do photographs on animal rights, but unsure how to pull it off. My friend and model in that photo is also an animal lover. She volunteers her spare time for animals is vegan. We spend the majority of our time together talking about animal rights. Therefore, she was perfect to help me convey a message, and I am glad you got it! The concept was there and I did make notes. I often plan my process and then, during that process, things often morph into something else.

My thought process was that humanizing the “animal” or “beast” would make it much less likely to be hurt by humans, since a lot of humans consider themselves a higher species. Lately, I am thinking of the film ‘Planet of the Apes’, the original 1968 film. It has such an interesting dichotomy between humans and animals. You can see this in my latest series.

There is truly a regal element to many of the figures (human and other animals), in your series. It is as if your work itself reflects the natural kingdom of the Earth and honors humans and all other creatures as regal within it. Would you say this is true?

Dawndra: I would say this is true. I am grateful for all that nature has to offer us as humans, and the more beauty we see in it, the less likely it is to be further destroyed. So, I set intentions to honor the beauty of humans within nature, existing in harmony.

#veganphotographer is captioned on some of your Instagram posts. How long have you been vegan and how does it inform your craft?

Dawndra: I stopped eating meat 20 years ago, and I enjoyed a mostly vegan diet. I have only been truly vegan less than two years now. Basically, I would eat cheese here and there so that I would not inconvenience others— isn’t that wild? The cows are VERY inconvenienced. We all grow at our own pace.

The Pacific Northwest is such a gorgeous and lush environment to live in and, of course, to work visually. Can you share more about your photography and the regional environment there?

Dawndra: There are endless options to shoot here. I tend to gravitate to some of my favorite spots, all within an hour or so of Seattle. The whole state is full of beauty, though. You could spend a lifetime shooting in Mt. Rainier National Park alone.

Your witch series is stunning— so darkly gorgeous and present. Do you have any backstory to share about these shoots? Anything interesting happen?

Dawndra: Oh, the witch shoots. My house is full of crystals and sage. I love to get lost in the story. I can say I saw something crazy at a graveyard once. I’ve heard ghost stories about some of the places I’ve shot, and [have] felt their presence, or at least thought so. But, for me, these photos are my way of entertaining the idea that there is more than meets the eye to humans and the universe. I have a quest to find the beauty in the mysterious and haunting side of humans.

I truly believe that our future must be rooted in being kinder to animals. Just that little act alone could teach humans how to better the environment and their own soul. For me, becoming vegan was the missing link to my mind, body, and soul being at peace. For others, maybe it could be just cutting down on meat, or becoming vegetarian. We have to learn to live together and respect each other— despite the species. The earth is calling for it.