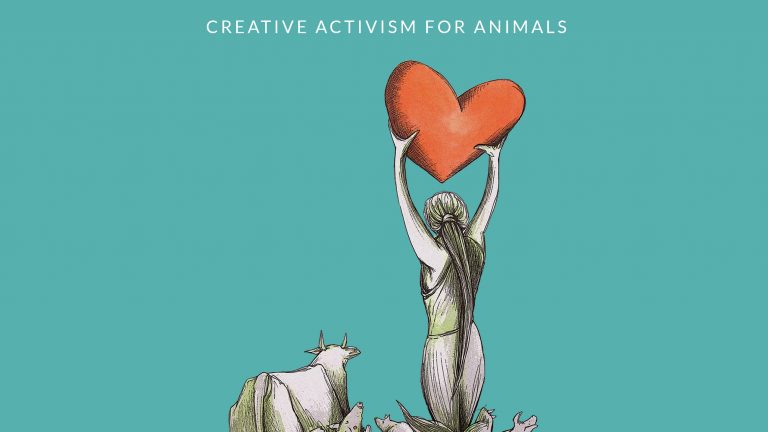 Interview with Leigh Sanders, Founder & Project Director of The Art of Compassion Project

The Art of Compassion is the first book of its kind—a collection of heartwarming and awakening vegan art featuring eighty artists from around the world. The artists are all ‘member’ artists of The Art of Compassion Project, an international vegan art collective that Leigh Sanders founded towards the end of 2014.

Read on for an interview with Sanders on the international nature of the collective, vegan art and advocacy work.

Interview with Leigh Sanders of The Art of Compassion Project

What inspired the book The Art of Compassion: Creative Activism for Animals? What was the process of creating it like as well as response of readers?

Leigh: I was inspired to create a book because after going vegan I wanted to find a way to get involved in animal activism. Opportunities for me to actively go out there and protest are limited, due to my disability, so I came up with a way to combine my love of animals with my love of art that I could do from the desk.

We started talking about the book in 2015 but things were put to one side as ‘The Art of Compassion Project‘ took off and we focused on other fund-raising projects. Creating the book was a definite labour of love and a huge learning process. Self-publishing may sound easy but when you’re producing a book with 180 images, let me tell you, it’s a lot of work! Jessica and I had many a sleepless night and had to have many proof copies made until we were completely satisfied. At the end of the day it was definitely worth all the work and I am so grateful to have had the chance to work with my wonderful co-author, Jessica Goodall and our team.

Readers seem to really like the book and all the reviews we have had so far have been positive. The only downside is that the book can not be bought in certain countries, as Amazon doesn’t offer the self-publishing option there.

How did you and your team choose the art and artists to be featured?

Leigh: As artists had come and gone in the years since we announced on the idea, we had to send out a second ‘call for submissions’ in 2017. We accepted all 80 of the submissions, curating the images they submitted and including 2 images per artist. We also chose 20 artists to be interviewed further for the book.

For readers who are not familiar with the concept of vegan art, can you share what it is?

It’s incredible that all proceeds from the sale of the book support Veganuary.  How did you make this possible financially?

Leigh: We chose to self-publish through KDP (Amazon’s self-publishing platform) as they offer print on demand publishing. This way there is no stock being kept anywhere and the book is published as someone orders it on Amazon. By doing things this way there was no financial outlay at all to get the book printed. In addition the royalties are paid directly to Veganuary every month.

Why did you choose Veganuary as the recipient of all proceeds from the book?

Leigh: I became a vegan in 2014 with the help of Veganuary and did some volunteer work for them in the early days when they were working on the product database on the website. I was really impressed by how information-rich and helpful the site was and how easy they made it to switch to veganism. I decided I wanted to raise some funding for them and the idea for the book was born.

The AOC team is very international!  Can you share a bit on how you all came together and how you work together from your various homes and locations across the globe?

Leigh: It all started with me on the Internet looking for vegan artists who would be interested in being included in a book of vegan art. I didn’t know a single artist at the time and spent weeks digging around on the Net. The interest was overwhelming, so many people were keen on the idea. I set up a group on Facebook to chat and noticed some artists were super keen on the idea of using art to raise funds for organisations in need, so I thought ‘What the heck – let’s put together a calendar and donate the proceeds to charity!’

Our very first project was this calendar in aid of Hillside Animal Sanctuary in the UK and we managed to raise  £319,29, which was thrilling. The idea for the book was put aside due to time restraints as more and more people joined wanting to use their art to benefit animals.

As for how we work – I send out a ‘call for submissions’ to all our member artists who can then submit art via email for a project. Some of our projects are online, like the calendar, online auctions, colouring-in book, etc. Sometimes the projects involve original pieces of art for auctions. Many of our most popular projects are the poster exhibitions at Vegfests and vegan festivals. We have an outstanding team of volunteers who go to the events to set up and handle things.

Do you have more projects on the horizon?

Leigh: To finish off this year we have Vegfest London coming up at the end of October, where we’ll be raising money for Hunt Saboteurs. Our 2020 calendar will go on sale (online) in November. All proceeds from that will be going to the Rainforest Trust. We’re looking forward to 2020 and to The Art of Compassion Project growing even more.

For more on The Art of Compassion Project visit their site at https://artofcompassionproject.com