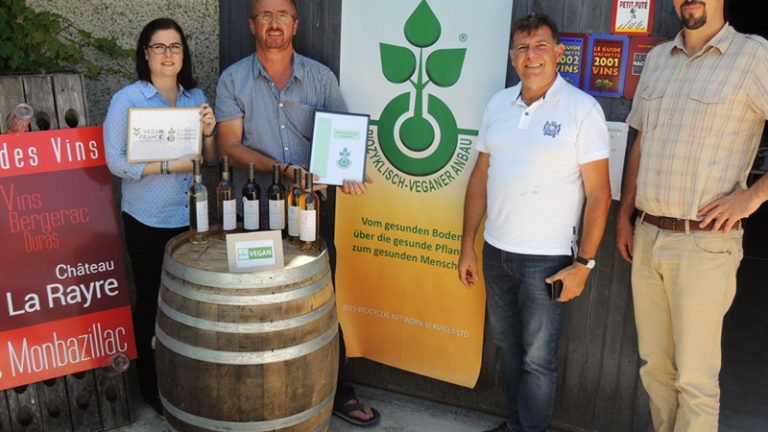 All photos provided by Hélène Modrzejewski

Hélène Modrzejewski was a Paris based freelance developer and web designer for 10 years before a turning point in her life when she decided to go vegan in 2012 after watching the documentary ‘Earthlings’.

Passionate about science from the beginning of her life, she has a university degree in Material Sciences and later attained a naturopathy and nutrition degree to work in an organic store. Additionally, she has an audiovisual technician diploma which provided her with the basics in visual communication and graphic design.

Pacific Roots Magazine: How did you get involved with vegan certification work?

Hélène: Vegan certification was not my first job. It all began while I was a web devoloper in 2013 and during my freetime created the French vegan directory. The Vegan directory was so successful that it became a professional association in 2017 (Vegan France Interpro). More than one million visitors in 2016.

My website has become a reference, so I had no moral choice but to find solutions to meet the demand for vegan certification. At the time, no French office was offering this service, and the desire to develop vegan products should not be hindered by administrative delays. I studied the existing foreign labels and decided to do better.

I have worked hard and with a lot of passion to train myself and develop a real certification body able to work internationally with mandatory audits.

I completely stopped my web developer activity to dedicate myself to this new function shortly after the launch of the service in 2016.

Pacific Roots Magazine: You are the cofounder and head of Vegan France Interpro, established in 2010.  Can you share more about the function and mission of VFI?

Hélène: I founded Vegan France Interpro alone and then was joined by Florence Dusseaux from Vegg2Food in 2018. Yes, the creation of the vegan directory made it possible to identify and create a unique French network of 100% vegan companies. It seemed logical to propose a follow-up and an animation oriented towards professional life in order to support these companies and start-ups that do a lot for veganism.

To date, no system or ministry is interested in these companies that create the innovation of tomorrow and save lives, that participate in ecology. Our missions are close to an association of professionals who defend and support its members to the general public. We offer member showcasing on our social networks, webinars, news articles, and events. We are also developing our links with other business-related vegan organizations around the world

Hélène: When the certification body EVE VEGAN® was founded, it seemed logical to invest in vegan and sustainable agriculture. I discovered the Biocyclic Vegan standard and I became their partner very quickly. Since then I have been working to make this standard known in France and managed to certify the first farm in 2018.

It is important to remember that the majority of fruits and vegetables produced in conventional and organic agriculture use animal fertilizers. As breeding and slaughter decrease, we will have to review our cultivation methods. It also means guaranteeing full traceability, which will be mandatory the day vegan products are understood by the majority of the population. Vegan from the field to the plate.

The world of agriculture in France is very macho and retrograde. Often against progress and ecology. It is a difficult mission to make people understand the interests, however multiple and important for the future, of agriculture without breeding and animal inputs. I am doing my utmost to move this issue forward in the public arena.

Pacific Roots Magazine: There is only one producer certified currently but the demand for French vegan wines is growing, correct? And the demand is primarily from foreign interest?

Hélène: Yes, the request for vegan certification of wines is the biggest demand of EVE VEGAN® agency and it mainly responds to a foreign request. France is the largest exporter of wines, especially organic wine, and the vegan trend is resulting in a gradual change in the winemaking method to meet this demand.

More than 40% of our product catalogue concerns wine and alcoholic beverages. It should be remembered that traditional winemaking methods use beef blood, pork derivatives, fish derivatives or cow’s milk derivatives.

To accompany this development I have developed a website that references wines and estates certified in France, whatever the label (EVE VEGAN®, V-LABEL, Vegan Society, Vegan OK).

Pacific Roots Magazine: You and your business partner launched a new website recently mapping vegan farms. Can you share more about this- why you established the site and what your intention is with the site long term.

Hélène: While working on the development of vegan agriculture I have found that there is no website of vegan farms in Europe despite the fact that they exist

In order to highlight them and to promote exchanges for these farmers, I have developed a free website with a geolocation map. Eventually, I would like this site to be exhaustive to give a real image of this agriculture. It is free to use and free to subscribe of course.