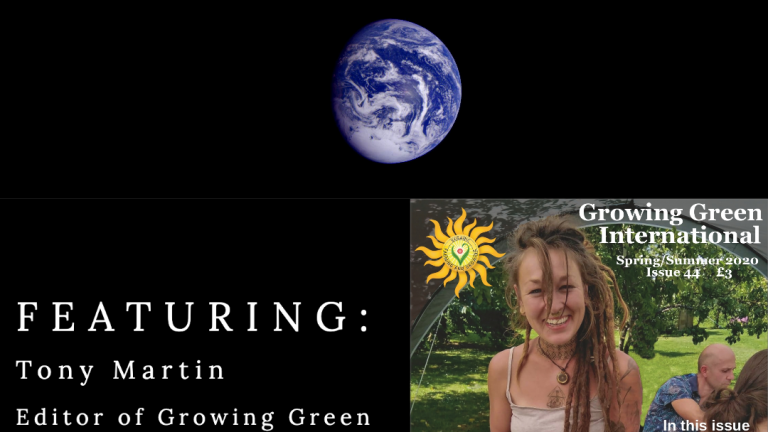 In this episode we talk with Tony Martin, editor of Growing Green International, the magazine of UK based Vegan Organic Network. We chat about the current pandemic’s influence on interest in the orgnazation, about Tony’s editorial role and process about the mission of VON and more.

Listen to the episode on Anchor, Spotify & PocketCasts.

First, we would love to get some background about Vegan Organic Network.  When was it founded, by whom and where?  How has it evolved over the years?

Tony: Veganic growing is but one aspect of a dynamic culture. Our commitment is to peace and justice for people, animals and the environment in a sustainable balance. To achieve this we must change our lifestyles and introduce a philosophy which will continue to maintain our unique planet. We are motivated by our awareness of the great unease in society that we are moving towards a world that can no longer sustain life in the natural way it has always evolved.

VON was formed in 1996 by David Graham. He is who I would call the father figure of VON. He has steered it, answered so many questions over the years and I look to him for guidance on various issues. Dan Graham (David’s son) is a great activist organising various events, including running the growing spaces at the Plant Powered expo, Vegfest and most recently Gardeners Veganic question time with a panel of experts.

Can you share more about your role at the Vegan Organic Network as editor of Growing Green International?

Tony: Back in 90’s I was approached by David Graham about becoming involved in VON but sadly at the time I had too many other commitments. Many years later I re-met Malcolm Horne, the previous editor whom has earned the title of “The Comma Meister” due to his far superior knowledge of punctuation and his sage council over the years. He lives near me (in Swansea) and I had helped him with some technical aspects of producing the magazine and also written a few articles for GGI and the Permaculture magazine. When Malcolm decided to retire he approached me to see if I would like to take on the task of editor. As I had both the technical knowledge of computer programs and a keen interest in growing it seemed like a good fit. Whilst my official title is editor the job entails every step involved in the production process. Journalist, editor, occasional photographer, page layout, mailout etc. I am very fortunate to have a team of people to help me with proof reading the articles at various stages of production.

I produce the magazine using legally free software for a number of reason; keeping down the cost of production; quality/choice, and a belief that money damages people, animals and the environment. For anyone who is interested in creating their own news letter, magazine or book I use PCLinuxOS (operating system), Scribus (Desk Top Publisher), Gimp (Graphics), and pixabay.com for images.

Many others have for years been involved in accounts, membership, merchandise and website maintenance and without whom VON could not exist.

Recently the 45th issue of Growing Green International was published and it was your 5th issue.  How has the magazine developed over time since the first issue was published?

Tony: The first issue was in 1996 and VON has “grown” in many ways in size and range. Some people think we are just teaching growing without animal products or chemicals but we have a wider remit. Among other things we encourage the commercial growing of veganic produce (for those who don’t want to grow their own), research into veganic growing techniques, promotion via media

In response to a surge of interest in gardening and growing your own, VON has made all back issues of Growing Green International Magazine freely available to the public (rather than just members) until the end of June 2020, “to help encourage more people to grow fresh fruit and veg during this challenging period.” What a generous and fantastic move!  When and how did your team reach the decision to do this and are you also experiencing a surge of inquiries at VON?

Tony: Before the Covid 19 crisis, we had decided to give away for free our digital edition (my 5th issue as editor of GGI). Once the crises reached pandemic, scale we realised that there would be more people than ever struggling both financially to buy fresh fruit and veg or to find them in the shops. By the end of March we decided that we could best help by releasing for free, all our digital back issues (rather than only available to members) till the end of June 2020.

Due to surge of interest in gardening & growing your own, the wonderful Vegan Organic Network has decided to make all back issues of Growing Green International Magazine freely available to the public (rather than just members) until the end of June 2020. What a wonderful initiative!! Thank you Vegan Organic Network!!