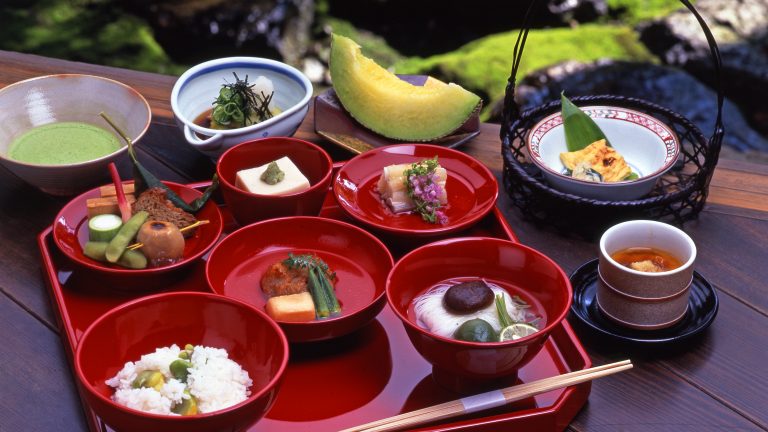 With a special interest in Shojin ryori, traditional Buddhist cuisine that is also inherently plant-based, Pacific Roots Magazine seeks to present ongoing features with restaurants and chefs working worldwide with the cuisine. This Summer we had the opportunity to talk with Kotani, head chef at Shigetsu, a Shojin restaurant located to the West of Kyoto on the grounds of Tenryu-ji Temple.

Established in 1339 with shogun Ashikaga Takauji as founding patron and Zen Master Muso Soseki as the founding abbot, the site where Tenryu-ji sits was originally a summer palace known as the Kameyama-dono. In honor of the death of Emperor Go-Daigo, the site was turned into temple Tenryu-ji in 1339 and was later completed with a consecration ceremony held in 1345.

Founded in 1993, Shigetsu was originally used as Tenryu-ji’s temple kitchen and served guests in the temple’s shoin (a large general purpose room in the main temple building). In 2000, however, as one of the projects commemorating the 650th anniversary of the death of Tenryu-ji’s founder, Zen Master Muso Soseki, a large building was constructed next to the temple’s UNESCO World Heritage landscape garden. This building has kitchens for the restaurant’s use and rooms capable of accommodating a couple hundred guests.

The following are excerpts from our interview with Kotani-san, head chef at Shigetsu with the assistance of a translator.

Kotani: In the feudal period Japanese cuisine was largely vegetarian, but the people did eat fish and such wild animals as deer and boars when they could get them. Thus in the old days strictly vegetarian cuisine was pretty much limited to the temple world.

Does Shojin ryori also largely follow principles of seasonal and local consumption, so largely developing dishes from ingredients as local and fresh as possible?

Kotani: Shigetsu has to serve too many guests to use locally produced ingredients only. Freshness is of course important, particularly with regard to the vegetable dishes (leafy vegetables, cucumbers, etc.).

There is a good bit of seasonal variation in the menu but the meals do have several standard items that remain unchanged throughout the year, such as sesame tofu, pickles, and a couple of dishes using soy and fu (gluten) products. However, there are also a number of items that change with the seasons.

How specifically does certain aspects of the menu at Shigetsu change with the seasons?

Kotani: For example, in the winter a warm miso soup with tofu would be served, while in the hot summer months the guests receive chilled bean soup. There are also items that are appear only in certain seasons, such as kamo nasu, a type of eggplant grown only in Kyoto and served only during the summer. The fruits served at the end of the meal also change with the seasons — strawberries in the spring, melon in the summer, persimmons in the autumn, etc.