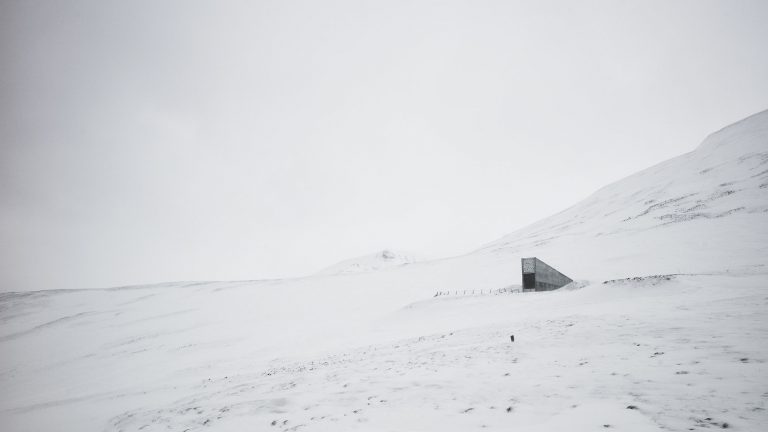 In the far reaches of the High North is an archipelago, one of the northernmost inhabited regions of the world, known for polar bears, tundras and glaciers. This archipelago is Svalbard, a group of islands belonging to Norway and also known as the ‘High Arctic’. The region is also characterized by the intense shifts of light from the season of the Polar Night, complete darkness from October to January when the Aurora Borealis can be seen streaking across the sky around the clock, to summers of true Midnight Sun.

Established in 2008 by the Norwegian Government, the Svalbard Global Seed Vault is the world’s largest, long term, secure seed storage facility. Representing the largest collection of crop diversity on the planet, the vault safeguards seeds of tens of thousands of varieties of essential food crops. Fully funded by the Norwegian government, the responsibility for operations of the vault is carried by The Ministry of Agriculture and Food who collaborates with the Nordic Gene Resource Centre (NordGen) and the Global Crop Diversity Trust to run the vault’s daily operations.

Pacific Roots Magazine recently connected with Åsmund Asdal, who is employed at NordGen and is the Svalbard Seed Vault Coordinator, in charge of the management of the Seed Vault operations. Åsmund has been working with plant genetic resources conservation for about 25 years, including NordGen projects.

Åsmund goes to Svalbard 4-7 times each year, at different times of the year, since 2015 for vault responsibilities. He notes that “Svalbard is a nice and a bit exotic place, however, becoming more and more touristic.”

Reading the ‘History‘ section at the Seed Vault site, you can see that the discussion about the Vault began in the 1980’s.  Curious as to who was part of that discussion, we fielded this question to Åsmund who noted that:

“The Nordic Gene Bank was at that time looking for a cold (permafrost) place to conserve copies of the Nordic Seed Collection (now NordGen), and Svalbard was considered to be the best suitable place for this purpose.“ -Åsmund Asdal, NordGen

NordGen had originally established a back up seed storage facility in Longyearbyen in 1984. A couple of other locations with permafrost had been considered including Greenland, Norwegian Jotunheimen and Swedish Torneträsk, but finally a coal mine in Svalbard was determined to be the best location for this facility.

Later, in October 2004, the Norwegian Government committed to fund and establish the Svalbard Global Seed Vault. Feasibility studies had concluded that Svalbard would be the best place also for an international seed storage facility for duplicates of gene bank seed collections.

The core purpose of the Svalbard Global Seed Vault is “Safeguarding seeds for the future.”  We asked Åsmund to summarize for us and our readers the primary reasons that warranted safeguarding.

“The main reason for gene banks to conserve seeds and genetic resources is that these resources will get lost if no one conserves them, e.g farmers using newer and more modern varieties, and older varieties go extinct when not used anymore. Threats to gene banks are war and conflicts, natural disasters, mismanagement, lack of resources and more.“ -Åsmund Asdal, NordGen

When asked about similar vault projects elsewhere on the planet and if he saw the potential for any to develop (and if so where), Åsmund responded:

“The Seed Vault is quite unique, – there are 1700 gene banks registered in FAO, but only one seed vault for conserving copies of these gene bank collections of crop plants. We are cooperating with a quite new facility Baekdudaegan Seed Vault in South Korea focusing on conservation of wild plants, inspired by the Svalbard Seed Vault, which conserves crop plants only.” Åsmund Asdal, NordGen

Editor’s Note: 17 years ago I visited the Arctic for the first time & was transfixed. I snapped this photo of the village Longyearbyen in Svalbard on that visit, knowing that this Arctic ‘imprint’ would have lifelong effects on my own imagination & worldview. The views were barren but, I thought, devastatingly beautiful as well. My interest was also piqued as to what human habitation of this region could mean for our species.

With this specific Arctic region interest in mind, as well as the fact that I live in Scandinavia now, we will be bringing the Nordics into tighter focus at Pacific Roots Magazine. There are no shortage of sustainability issues and stories to learn about right here in Scandinavia and share.

Here at Pacific Roots Magazine, we seek to explore issues of environment and sustainability in all regions of the Earth. This month, with this brief look at the Svalbard Global Seed Vault, we launch our Arctic category within our Nordic Dimension coverage.