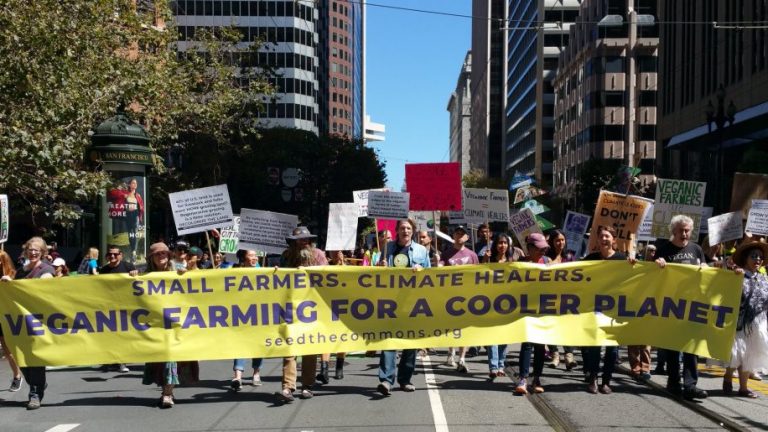 Founded in 2009 in Lausanne, Switzerland, Seed the Commons was originally named Millahcayotl or agriculture in Nahuatl, an indigenous language of Mexico. Millahcayotl is a powerful term because it literally translates to “the way of the milpa”. The milpa was the principal system of plant-based agriculture in North America before the arrival of the Europeans. Seed the Commons founded an organization that worked towards sustainable food systems based on traditional knowledge, and that upheld a holistic understanding of the relationships between what we eat, how we grow food, and broader societal and environmental issues. As animal liberationists, Seed the Commons liked that the example of the milpa further signaled that diets and agriculture can be healthy, sustainable and complete without animal exploitation.

What is your background and how did Seed the Commons manifest as the organization it is today?

Nassim: Before founding Seed the Commons, Chema and I had a long history of activism. He had been heavily involved in the independent media and anti-globalization movements of the early 2000s and I had been active in various human rights and environmental issues around the same time. We also held strong beliefs around animal liberation (I had been vegan for close to 15 years and Chema had been raised vegetarian). We understood the landscape of activism around radical politics and animal rights and we knew that something was missing: a movement for a radical overhaul of our food system that included non-human animals in our circle of compassion.

Can you share more about the #GetMilkOut campaign- how it started and subsequent progress?

Nassim: We see the corporate takeover of food systems as a modern-day mechanism of colonization. To oppose this, we seek to understand and expose how corporations get the public to buy into their lies. I started studying the case of the globalization of milk consumption, as it offered many insights into the ways in which food cultures are transformed to support corporate profits. School milk programs are key to the growth of the dairy industry, as children are a “blank slate” and the consumers of the future. School milk programs can also only operate because of the pre-existing dominance of Western or European culture, which is then further normalized throughout the world with each new generation of school milk recipients.

Nassim: School milk programs are a powerful place to start fighting back and reasserting the value and legitimacy of diverse food cultures and of community sovereignty over our food systems. We launched #GetMilkOut in San Francisco, where 89% of children in the public school system are children of color from largely lactose intolerant communities. These children come from food cultures that include plenty of calcium-rich foods, but their health is sacrificed to subsidize the dairy industry. They are taught that the only way to develop into healthy adults is to drink cows’ milk, devaluing and erasing the foods that nourished their ancestors for generations. They are socialized into the idea that normal, healthy bodies that are lactose-intolerant (the norm in humans and other animals) have a defect that must be circumvented to access basic nutrition.

Nassim: The launch of #GetMilkOut was a powerful event on World School Milk Day in 2017, with speakers that included community organizers, dairy-free moms, and a physician who was named San Francisco Examiner’s Reader’s Choice 2016 Winner for Best Pediatrician. Since then we have been conducting outreach and collecting signatures in San Francisco to get the Board of Education to take a stand against mandatory school milk. We are currently planning to expand the campaign to other American cities, and ultimately develop a federal campaign, since school milk is a federal requirement for reimbursement of school meals.

The Working Group on Veganic Farming is a collective of farmers, activists and others who are interested in veganic farming. Can you share more about the veganic outreach work that Seed the Commons does?

Nassim: The first People’s Harvest Forum in 2015 was revolutionary in that it was the first conference on radical food politics where veganic farmers had the floor. We created the working group shortly after to channel the enthusiasm generated by the forum. The working group brought together farmers and activists to discuss ways to support and spread veganic farming. While it is not currently active, its discussions led to an upsurge in pro-veganic activity, including the founding of the Bay Area’s first veganic community-supported agriculture (CSA) project by Lazy Millennial Farms. It also organized veganic field trips, supported people getting started in veganic urban gardening, and led to the creation of a veganic resource center and mapping project.

Seed the Commons has been especially active in building public awareness around veganics, as we found it urgent to counter the dominant narrative in grassroots and consumer circles that animal exploitation is necessary in sustainable farming and gardening. We’ve spoken widely to vegan audiences about the strategic importance of supporting the veganic movement, and we’ve brought veganic farmers to non-vegan audiences. As part of our approach of normalizing veganism in all activities, we’ve hosted numerous veganic gardening workshops in a city where the urban gardening scene is not inclined to veganism. For the fourth year, we will present a veganic panel at a grassroots agroecology conference, as we believe it is essential to claim a space for vegans in the sustainable farming movement.

The Rise for Climate, Jobs and Justice march that took place in San Francisco in 2018 was an incredibly important win for veganic advocacy and the normalization of veganism as the default in farming. Seed the Commons organized the only contingent led by farmers, and each one was a veganic farmer. The word veganic reverberated throughout the streets of San Francisco, but our message included a call for the transition away from industrial farming and for the protection of small-scale farming. This year, we are working on growing the People’s Harvest Forum as a platform for veganic farmers in partnership with the Rancher Advocacy Program.

What is your perspective of the future of veganic farming in North America? Globally?

The concept of veganic farming is currently unfamiliar to most consumers and even to the majority of the farming community. With that said, veganic farming is a logical extension of organics, and some farmers have come to it because they wanted to use cleaner inputs or be independent of external inputs and make more efficient use of their resources – in other words, to be more sustainable.

I strongly believe that like organics, interest in veganics will take off exponentially. The change will in part be driven by animal liberationists who will realize that most organic farming is dependent on the animal agriculture industry. It will also be driven by farmers who make the switch to veganism, and by consumers who want cleaner, more sustainable food.

Ultimately, necessity will be the deciding factor in the adoption of veganics at a global level. Even though it is hard for many to admit, shifting away from meat consumption to counter climate change is inevitable. Animal agriculture will become more and more peripheral, forcing consumers to shift to a more plant-based diet. Veganics will be the culmination of this trend.

Can you share any stories, interesting tidbits about specific vegan farms that Seed the Commons has worked or collaborated with in some way.

Nassim: The difference between organic and veganic farming is mainly thought to be in the use of fertilizer. Veganic farming eschews manure, blood meal, bone meal and other animal byproducts that are usually used in organic farming. But there’s another important difference that’s less spoken about: how to deal with “pests” on the farm?

We’ve been very lucky to work with Matt Loisel, who founded Lazy Millennial Farms. As a new farmer and vegan, he had no guidelines for veganic farming and had to pave his own path through trial-and-error. He had been trained to trap and kill gophers, but realized that he could no longer do it. He decided to let the gophers on his farm live and be free, and he named them Gertrude and Gunther. What he learned was that gophers love to eat certain grasses, they only turn to vegetables when they have no other option. By planting a row of their favorite foods, Matt could direct them away from the crops he was growing for humans, keeping everyone well-fed and happy.

Photos below: Veganic gardening workshop taught by Matthew S. Loisel and hosted by Seed the Commons.