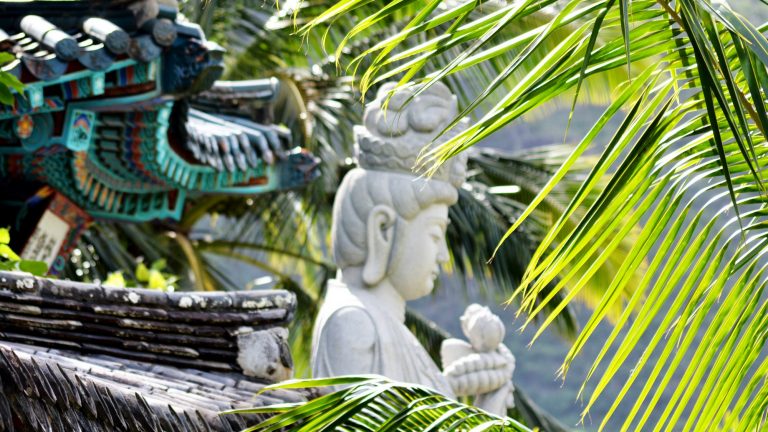 This month we launched the first posts in our new Faith, Sustainability & Stewardship series, beginning with an interview with North American based Jewish animal advocacy organization SHAMAYIM. We were excited and honored to establish the series with a dialogue with this wonderful organization. We will continue to feature the work of faith based organizations worldwide working with animal advocay issues and other environmentally engaged activities such as promotion of plant-based diets.

I have envisioned approaching this theme for years now: the relationship between religious and spiritual practice and our perception of environment and our role within it. I became increasingly curious about the various manifestations of spiritually inspired and engaged environmentalism.

I became interested in Buddhism around 20 years ago after my first visit to a Tibetan Buddhist temple on the beautiful Big Island of Hawai’i. Over the years I became more familiar with Buddhist philosophy, later doing thesis work on Tibetan Buddhist architecture in North America. With time however, though the interest remained, I was not engaged in any practice or study of Buddhism.

Then in 2015, shortly after having gone vegan the year prior, the interest percolated forth again. There was a new dimension this time (or perhaps simply just newly revealed). I now had questions about consumption, diet and its relationship with religious ethics.

I knew that suffering was a central concept in Buddhist awareness and that precepts such as no killing were also central to its philosophy. These were the very things that connected me to becoming vegan- increased awareness of suffering and a desire to minimize killing and suffeering as much as possible with my own consumption choices. I often say that veganism led me back to Buddhism.

Over the years, these questions began to extend to other practices. I was genuinely curious about, for example, Christianity’s viewpoint of humanity’s role in relationship to other species as well as our role on Earth. As my own interest in plant-based and vegan advocacy also deepened over the years, I was excited to learn about faith based organizations that work with animal advocacy issues as well as promotion of veganism.

People sometimes ask about the naming of this site – Pacific Roots Magazine. The name is absolutely a tribute to USA’s West Coast. I was raised in California and have inhabited the other two states of the coast- Oregon and Washington. I have also lived in Alaska and Hawai’i which are in many ways connected to West Coast communities, environments, economies and networks. I view this coast as my home and revel in its diverse natural beauty and social energy.

The naming of the site also refers to the other meaning of ‘pacific‘. Many of the themes featured here are about ways of improving our relationship to the environment around us. I do not call Pacific Roots Magazine a “vegan website” but it won’t take long for any visitor to realize that it is a central theme. The notion of veganism as a means to reduce the suffering of Earth’s fellow creatures is its inherent pacific force.

Our Faith, Sustainability & Stewardship series is devoted to exploring issues of religion, animal advocacy and welfare, cultural tradition, consumption, ethics and more. We are interested in exploring environmentalism rooted in religious practice and belief. There is a great deal of existing material about this as it is certainly not a new perspective or phenomenon and we look forward to learning about and referencing much of this work. We also look forward to focusing on contemporary developments of environmental action inspired by religious belief.

When one brings up stewardship, there is the notion of resources and responsibility, certainly a key and pressing theme of our current age. We hope to steer this series over the coming months (hopefully years), to engage with organizations and individuals all over the world working with these themes and offer an increasingly in-depth exploration of the relationship between religious beliefs and practices, our interaction with other species and cultivation of environmentalist spirit on both an individual and collective level.