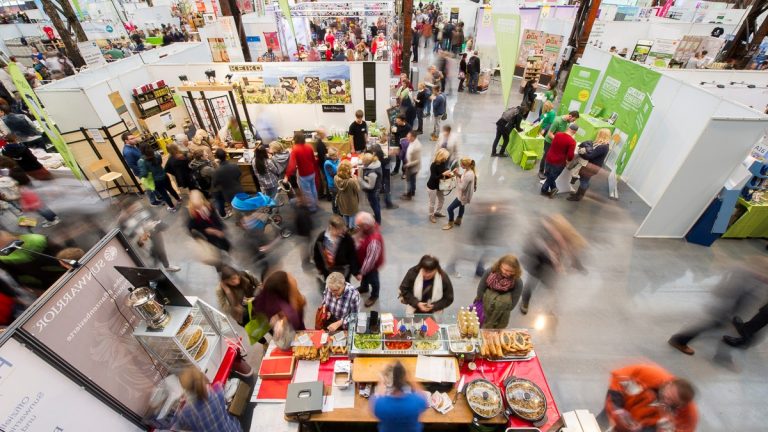 With a core team is based near Düsseldorf, VeggieWorld operates with partners and colleagues around the world who support them in organizing multiple VeggieWorld expos.

Pacific Roots Magazine had the opportunity to chat with Hendrik Schellkes, CEO & Co-Owner of VeggieWorld, about VeggieWorld’s history and activities.

Who founded VeggieWorld & what was the background to establishing it?

VeggieWorld was founded by a company called MCO GmbH. MCO organized a health fair for many years. The German association VEBU (called ProVeg today) was an exhibitor at this health fair and had the idea to form VeggieWorld. Then VeggieWorld was started as a special area, being part of the mentioned health fair.

Where was the first VeggieWorld expo held?

In Wiesbaden near Frankfurt in 2011 – and on the evening of the first day, the two main news shows in German TV mentioned VeggieWorld.

Was it planned from the very beginning to have multiple expo locations?

No, it was not. After the first edition in Wiesbaden, the former organizer added Düsseldorf as a second location. Those remained the only two editions until 2014.

Which cities were the most recent added to the list of expos?

Can you share any interesting differences between the expos in the different cities? For example which is traditionally the biggest expo? Are there some that are held in more unique buildings and locations?

In general the VeggieWorlds in Germany are the largest as of today. All of them host more than 100 exhibitors. However Paris is the single largest one of all, with a record of 145 exhibitors in Autumn 2018. And we organize VeggieWorld in Paris twice a year.

When it comes to locations I have a few favorites. In Düsseldorf we are based in a very old, but technically well equipped former steel work. That gives a very special atmosphere. In Lisbon we use Pátio da Galé, a beautiful old building in the center of Lisbon with huge columns and an open roof. In Paris, VeggieWorld is held in a cultural center called Le Cent Quatre. Even during VeggieWorld you see young people dancing and performing in workshops or just on their own.

But the most impressive location we ever had was La Cupula in Barcelona. The location is situated on top of Las Arenas Shopping center. The building is a former bull riding arena and the facade has been largely preserved. From the surrounding terrace around our hall on the 5th floor one had a great view over Barcelona.

As Europe’s largest consumer fair for vegan lifestyle, can you share your perspective of why you think VeggieWorld has achieved such excellence & great attendance as an expo?

Well, it’s hard to praise ourselves. The most important reason for our success is surely the development in society towards a more sustainable and resource-saving life. The topic is on everyone’s lips, new companies are springing up and the media are gratefully accepting information.

But certainly we have also done some things right. Naturally we stand as a team fully and completely behind contents of VeggieWorld. But of course we also pursue economic interests. Rent and salaries have to be paid and the costs for halls, trade fair personnel, advertising and stand construction are higher than most people expect. From there it is our most difficult task to find the balancing act between a celebration for vegan interested people and an economically for all involved portable meeting. And I think that we have managed this balancing act very well so far. We are therefore deliberately positioning ourselves not as a festival, but as an expo – but as a lively, open and entertaining expo.

And my team is very passionate about their work and our customers appreciate the personal service. We see many customers up to ten times a year at different locations – this often creates a very pleasant and personal relationship.

What is your perception of the change of interest in vegan products & lifestyle since the founding of VeggieWorld?

In general, high quality is becoming increasingly important for consumers. While in the beginning it was perhaps more about making vegan products available at all, manufacturers today pay much more attention to the quality of the products. So even within the vegan product family, organic seals, fair manufacturing processes and above all the composition of the ingredients are becoming increasingly important.

In addition, the composition of our exhibitors shows that vegan non-food products are on the rise. While in 2017 there were only approx. 5% non-food exhibitors, today the average is already 18%. In Paris we already had VeggieWorld editions with 50% non-food exhibitors. The demand for these articles is high – people want to live a vegan lifestyle not only on their plates, but also for their clothes and cosmetics.

Are there any cities that your team looks forward to expanding to in the near future?

If it were up to me or my team, we would still have many ideas and wishes for new countries and cities.

However, we want to grow sustainably and a new location always means a financial investment. The respective market must also have a certain degree of maturity, i.e. a minimum of potential exhibitors.

Our short-term focus will be on Asia. Here we have been able to present two good trade fairs this year and see great potential. We are currently thinking of Shanghai, Bangkok, Singapore and Hong Kong.

But Russia, Brazil and of course the USA are also more than exciting markets. But as I said, we proceed with caution.